(Baltimore, MD) - Iota Phi Theta Fraternity, Inc. mourns the loss of retired General and Secretary of State Colin L. Powell, and we offer our condolences to the general's family.

General Powell was a true American patriot. Born and raised in the South Bronx in New York City, the general was a graduate of the City College of New York, where he participated in ROTC and was commissioned as a second lieutenant in the Army. He was a White House Fellow under the administration of President Lyndon Johnson and rose to the rank of four-star general. General Powell served in Republican and Democratic administrations and in addition to being the first Black Secretary of State, served as National Security Advisor and the first Black Chairman of the Joints Chief of Staff. The general also served as Chairman of America's Promise, a not-for-profit organization dedicated to mobilizing the nation's youth to public service.

Iota Phi Theta Fraternity, Inc. has a history of service in the military and recognizes the tremendous sacrifices of our women and men in uniform. Today, our thoughts and prayers are with the Powell family and his many friends and colleagues, and the enlisted members of the United States Army.

For further information, contact National Director of Communications, Walter Fields, at 973.738.7876 or This email address is being protected from spambots. You need JavaScript enabled to view it.. 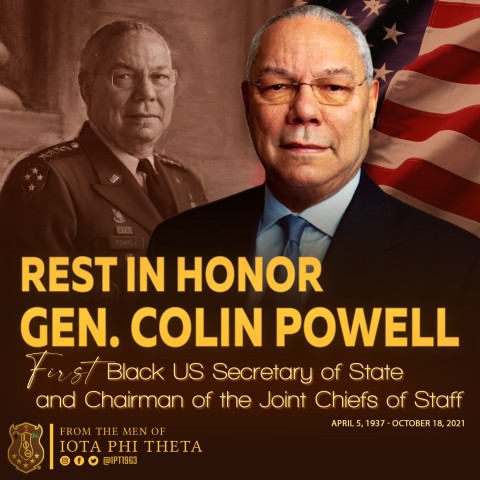 
No comments yet
Unable to load the contents of this dialog.

You need to enable user registration from User Manager/Options in the backend of Joomla before this module will activate.
Copyright © 2021. Iota Phi Theta® Fraternity Inc..
Desktop Version